Today’s practice video features a pair of fantastic one-handed catches from wideout Cyrus Jones and defensive back Nick Perry, in addition to more video of the wide receivers, defensive backs and quarterbacks.

Before you view, click here to read my report from practice, including an update on the status of wide receiver Chris Black and which NFL general manager was in attendance.

The Alabama Crimson Tide hit the practice field for the first time of SEC Championship week Monday afternoon, and Chris Black stole the show, practicing for the first time in a regular white jersey as opposed to the noncontact black jersey. There’s also a bonus drill or two thrown in for you.

The Alabama Crimson Tide took to the practice field for the first time in Iron Bowl week today, but before we get to that, here are some headlines from the practice viewing period.

– John Fulton was practicing fully, not even wearing the black noncontact jerseys. The weekend off sent him from questionable to probable, if not completely off the theoretical injury report.

– Chris Black is still wearing the noncontact jersey as he tries to recover from his preseason shoulder injury. He was also wearing No. 80 in practice today, as he is likely the one that will simulate Auburn’s Emory Blake, who leads the Tigers with 733 receiving yards this year on 47 catches for three touchdowns.

Here is the video:

There is never an off week in the Southeastern Conference. Just ask Alabama offensive tackle Cyrus Kouandjio. 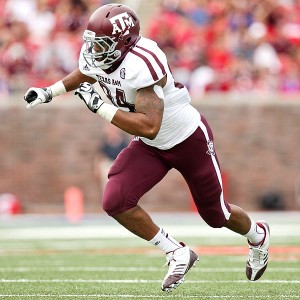 Just seven days after rising to the tall task of containing LSU defensive end Sam Montgomery, Kouandjio had to help D.J. Fluker combat Texas A&M defensive end Damontre Moore, who has reinvented himself in the offseason to the point where he was able to chase a Mississippi State wide receiver from behind. As a 6-foot-4, 250 pound defensive lineman.

Kouandjio came away impressed with Moore for the few times they met, as Moore spent most of his time rushing against Fluker.

The speed that Moore found over the offseason may present a difficult challenge for most offensive linemen, but Kouandjio has a grasp of it.

“At times it can be challenging,” Kouandjio said. “But, you know, if your technique’s sound, good things should happen. You know, you shouldn’t have any problems.”

For more from Kouandjio, you can see video of the rest of his interview by clicking here.

Devery Henderson (9) celebrates scoring the final touchdown of the Bluegrass Miracle game as Kentucky fans who stormed the field try to get out of the way.
Wire photo courtesy of The Baton Rouge Advocate

In the 2002 season, the Tigers traveled to Kentucky and earned a 33-30 win that prompted Saban to say

I don’t know what to say. I feel bad for Kentucky’s players. But this is a big moment for us and I’m happy as heck for our team….Well, sometimes you gotta be a little lucky and I think that was our luck right there.

And Kentucky’s radio play-by-play man at the time, Tom Leach, to say

How much heartbreak. Kentucky fans are up on the goal posts. I don’t know why.

But it wasn’t the game that LSU was lucky to escape with that Saban was focused on, it was the game after: when Alabama came to Death Valley and handed LSU a 31-0 defeat.

This time around, it was a game versus the LSU Tigers that gave Saban’s team the Bluegrass Miracle phenomenon.

“You guys don’t think so because we won one and lost the other one. If we’d won this one, you wouldn’t be concerned, either. I was concerned then,” Saban said. “But you all live in the results world, we kind of live in the process world. It’s hard to get people to respond.”

Watch other hits from Saban’s press conference earlier today by clicking here, plus my story the third down struggles for the Tide, including Saban’s thoughts, by clicking here.

Finally, be sure to follow me on Twitter to get up-to-the-second updates on everything Crimson Tide: @Brett_Hudson.

Lacy moving from student to teacher

Outside of being the student-athlete as labeled by the NCAA, he was also being taught by Mark Ingram and Trent Richardson the valuable lesson of ball control.

“When you fumble, it’s always a tough thing to get over. That’s why you have  your teammates,” Lacy said. “They’re here to support you and make you feel better about it.”

Mark Ingram (22) and Trent Richardson mentored Eddie Lacy to be a dependable ball-carrier, and now he is trying to do the same with T.J. Yeldon.
Photo courtesy of The Birmingham News

Lacy lost two fumbles in the 2010 campaign, both within the 5-yard-line as he was entering the endzone.

Although Lacy’s new student was not on the brink of the endzone, true freshman T.J. Yeldon has had two fumbles in the last two weeks, one nearly costly and the other very costly.

Yeldon let the ball slip out of his hands on the LSU 10-yard-line with 1:06 left, which LSU recovered and eventually scored on.

Yeldon did it again with 9:10 left in the Texas A&M as the ball fell into the hands of Dustin Harris. The Aggies, like the Tigers the week before, also scored a touchdown on the ensuing possession.

Lacy is trying to mold Yeldon just like Ingram and Richardson molded him and not let the fumbles derail a successful freshman season.

“It’s football, bad plays are going to happen. You’re going to make a lot of good plays, as well,” Lacy said. “You just have to get the rest of those out of your mind.”

“If a bad play happens at a bad time, you’re going to think about it a lot, but you just have to get over it and keep playing no matter what just happened.”